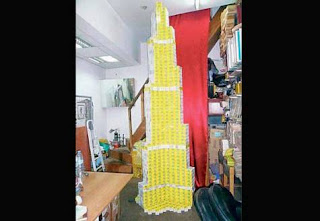 Don't pretend you didn't want to check out the 4-metre replica at the Al Barsha Lulu's just before the world's tallest building was unveiled and renamed in one fell swoop in January. But you didn't, and now it's too late to take a gander at all that chocolatey goodness (and to dream of a giant mug of milk and upending the thing into it). At least I hope it's too late; that thing would be getting seriously gnarly right about now.

Several weeks later, and I don't know how I missed this little gem, someone made a Burj out of toothpicks. Fittingly, considering it is Dubai, the American who did this believes he constructed the world's smallest replica of the landmark. As Steven J. Backman, a San Francisco native who has also crafted the Empire State Building and a Golden Gate Bridge, put it: "The miniature replica I created of Burj Khalifa took me seven hours to create and a bucket of patience."

But as the Gulf News again reports, all is not lost on the Burj-replica front. Succeeding in his third attempt, Manoj Khira spent six months and Dh110,00 (almost $31,000 Cdn) making his own version out of phone cards. Instead of the house-of-cards version, he (rather ingeniously, to me) separated the cards into bundles, and taped them together to make little bricks.

The result is about 3.6 metres tall. He is expecting the Guiness World Records people within a few weeks.
at March 06, 2010