I have finally figured out some of the honking

There is a serious honking problem in the UAE. I was speaking to my brother once outside of Al Falah Plaza, and we could barely hear either other over the cacophony. Most days I just deal with it, but if I am at all cranky it makes me feel like going postal. I think the biggest problem is that back home, it is considered extremely rude to honk at someone. So when people are honking all the time, I tend to take it personally. And I don't even have a car, so how much sense does that make? But it's not like honking is a nice noise, so I guess I will let myself off the hook.

Anyway, oddly, a lot of the honking was sorted out for me today. It was my day off, and I have been hailing cabs all over Abu Dhabi running errands. I was having a bite of lunch in a restaurant called Ya Zaein when I heard honking coming from outside. There, a woman in a giant Toyota SUV had rolled down them window. An employee of the restaurant ran out to talk to her, then ran back in. That's when it dawned on me: she wasn't even getting out of her car to place her order. Sure enough, when her food was ready, he went toddling out to give it to her. My next stop was the bank, where I heard another round of honking, this time LOUD and ANGRY. There was a man, his car blocked in by another car. I took a picture of it, mostly because this happens all the time and if it's not your car that's being blocked in, it's quite funny. 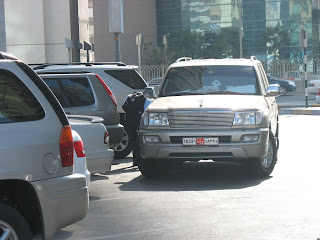 But if it is your car, or one you are to be travelling in, not funny at all. A little later in the day, while stopping in to buy a cold drink at my local corner store, I heard more honking. There was another SUV, another woman. She was asking for him to come out and take her order. For the corner store.