More Libyan protests, at the embassy in Abu Dhabi this time

In Abu Dhabi, the Libyan ambassador to the UAE this morning told a crowd that although he was with the people, he wouldn't remove the Libyan flag in solidarity. Unlike others of his ilk around the world, he has not resigned nor does he seem prepared to.

Omar al Ghanai gave the short speech, in Arabic, hence none of it is here yet, to dozens of protestors outside the embassy.

Bad (or good, depending on how you look at it) timing for Younis Beshari, 23. He came to the UAE from from Benghazi 10 days ago, and wants to return to join the protests against Gaddafi.

"I feel ashamed sitting in front of the TV, watching this," he said. "I want to be with my friends."


Yesterday's protest in Dubai was a good deal more boistrous, larger and much longer than we are used to seeing here. Up to 100 people gathered to condemn violence in the North African country, in the process destroying a photo of Gaddafi and replacing the flag with the country's former standard.


My favourite part of the story, only because I simply can't believe I read it (and can you imagine something like this happening in the West?) was this:

The crowd said they would stay outside the consulate until the Libyan regime fell, but agreed to disband peacefully at 3pm after police told them they could submit an application for a time and venue at which to continue their demonstration.


Here are some great pictures of yesterday's protest, courtesy of Essam al Ghalib. 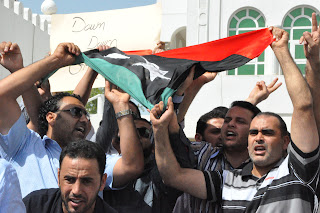 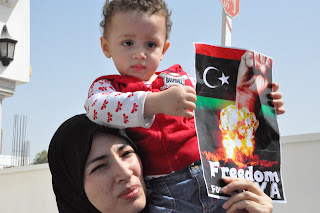 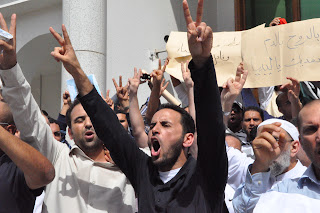