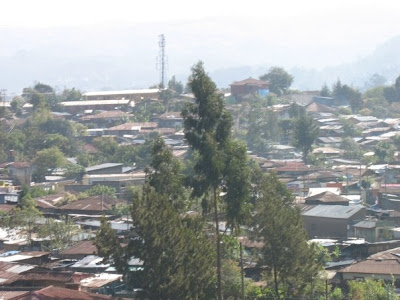 I imagine by now anyone who reads this blog (and I love it that some people do) is as tired of my never-ending Ethiopia slide show as I am. But just a few remainders. We stayed at the Hilton Hotel, which is a sort of a gathering centre for the city. It has the banks, the travel agencies, the bars and the health club. And a lobby (and lobby bar) that offered one of the most interesting assortments of human beings I have ever seen. At one point I looked around the lobby and saw a) a group of nuns b) two Rastafarians c) several (I assume) prostitutes d) two American military men e) two priests f) and a Western couple with their newly-adopted Western baby.

On that last point, Angelina Jolie really started something when she came here to adopt Zahara. Apparently the country has some of the most relaxed adoption laws around (ie couples over 35 can adopt here, single people) and it's quite obvious. At breakfast I'd say 3/4 of the tables are new parents.

Another thing about the Hilton. I arrived, exhausted, on a short overnight flight. After sleeping for a few hours I stumbled downstairs to the pool, where I lay on a chair to wait for my friend to arrive. That's when I heard it: tink, tink, tink. I looked over and saw a blue tarp erected around a section of the pool patio. Behind it were two men chipping away at the concrete. They never stopped, 9 hours a day, even on Saturday and Sunday. It reminded me of the men I would see working in the hot sun in India, who would be sitting in between a large pile of bricks, and a small pile of dust, not a bottle of water in sight.
at May 24, 2008