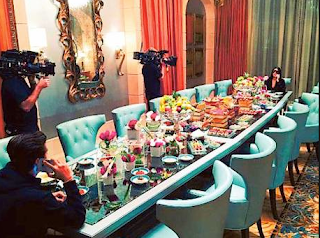 I finally got around to watching the two episodes of Keeping Up With the Kardashians where Scott Disick and Kim Kardashian visit Dubai with their crew. I'm still sort of blown away with this family as a cultural phenomenon. A couple of years it didn't seem possible for them to be more famous, and yet here they are, more and more and more.

Anyway, it was scintillating viewing and not at all fake. Here are a few takeaways:


The makeup demonstration with Mario Dedivanovic was full of hard-hitting questions from the heavily cosmetised, mostly female audience members. Example:

Audience member: "Would you recommend the round foundation brush or the flat one?"

Audience member: "Thank you. Kim, I love you!"

Kim was still traumatised by her robbery in Paris and spent part of the show being stressed out by her first paid public appearance and people taking pictures of her in Nobu.

Before she went out for the makeup demonstration, she actually said this: "Whatever's meant to be will be. If I don't make it out alive, tell my kids, my family, my husband I love them."

(Aside: At the Royal Bridge Suite in the Atlantis, they monogrammed Kardashian's pillows "KK".)

As usual, Disick had the only good lines, because he's the only interesting one. He summed up Dubai, and the Atlantis, when he looked at a massive food spread on a crazy-long table in Kardashian's suite and said "this isn't over the top at all".

Virgin Radio Dubai's Brent Black was cringe-worthy when he referred to the incident as he introduced Disick to his fans - screaming fans, no less - at an event.

"I heard you had to have your phones out to talk to each other," he said. "That's a little awkward, I'd imagine."

More observations: Scott Disick wears a hoodie 80% of the time; it may have been winter in the UAE but the fur coat Kardashian wore on her desert dune-buggying was what the kids call "ridic" and Kardashian has zero respect for time zones other than hers and thinks nothing of calling people up in the middle of their night back home whenever she wants to tell them something.

I'd have no friends or family left in Canada if I kept doing that.