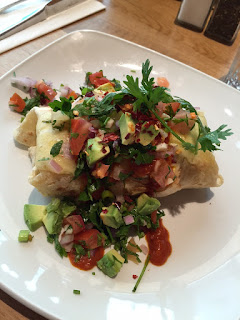 You will not be sorry.

The Arabic Sesame Street is back across the GCC after a 25-year hiatus, and produced right here in Abu Dhabi: The first of 25 episodes of Iftah Ya Simsim screen Friday night. The show is produced by Abu Dhabi Education Council, twofour54 , the Arab Bureau of Education for the Gulf States and Bedia Media.

Yoga is expensive, and in the UAE, it's really expensive. And that's before you buy any of the clothes. The cost of classes, usually Dh60-per and up,  tend to price out a lot of the population. Finally, a studio in the UAE is following the lead of studios in the west, giving back, and offering cheaper "community classes". From September 11 Inspire Yoga in Dubai will offer 60 minute-classes on Fridays at 3.30pm for Dh30. I can only hope the country's other studios will follow suit.

I really don't know what to think about the South African comic Trevor Noah taking over The Daily Show. I haven't seen much of his comedy and Jon Stewart has been my TV boyfriend for so long I'm going to be grieving over his departure for awhile. But I will say this: Noah works hard.  The most exciting news of the week is that he and US comic Dave Chappelle are headlining the new Dubai Comedy Festival, October 15-24. Immediately we wondered if this could be true, with Noah being kind of busy taking over the Comedy Central show September 28 and all. Turns out he's going to moonlighting, with weekend shows booked in Dubai, as well as London and Toronto, through to November. Also: "He just loves Dubai,” says Emirati funny man Ali Al Sayed, one of the organisers. “He was in Dubai performing his own show when he found out he got the job for The Daily Show. He also came here less than two months later to celebrate his birthday with his friends. Whether he knows it or not, he has become almost an ambassador for Dubai.”

One of the best emails I've had all week: There's a new Meetup.org group in town and it's adorable. AD Metalheads just launched but already has 10 members and wants more. It doesn't matter if you love rock or metal, either. All are welcome. Over to Wrath, the organiser: "I have no profile picture because real Rock fans do not give a cookie about what I look like or where am from."
at September 03, 2015