Christmas in Abu Dhabi: Can you see the difference? 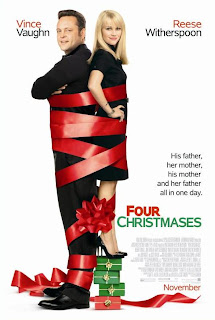 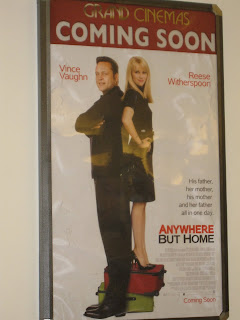 A couple of weeks ago I caught a screening of the Vince Vaughn/Reese Witherspoon comedy Four Christmases - I loved, hilarious - but curiously the name had been de-Christmasized for this region. I say curiously because, well, even though this is a Muslim country, the signs of Christmas are everywhere. People clearly love this stuff.

Also curiously, because you can change the title, remove the red bow from the movie poster and change the presents she's standing on to suitcases, but the plot remains the same, as does the major Jesus-and-Mary Christmas pageant scene. Wouldn't you rather tell people what the movie is about than have them find out in the theatre? Just asking.
at December 24, 2008

Hmmm, now you've peeked my interest and it could be something worth looking into. Christmas trees, cards and even Santa villages are all over the place. To change a movie title and picture seems quite strange.

In the UAE the original title and poster does not pose any problem. Perhaps in Saudi things might be different.